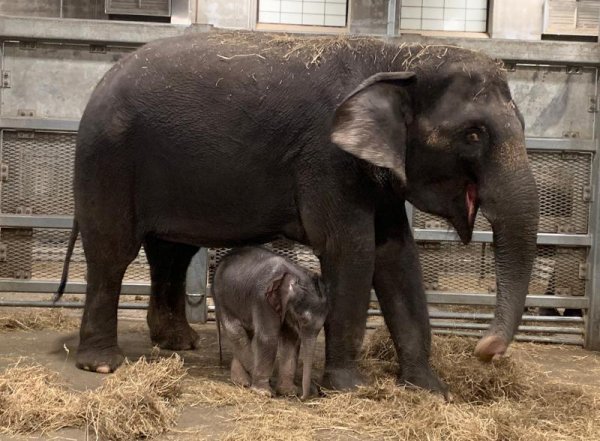 The calf, a male, arrived at 5:30 a.m. Tuesday, January 15. The baby is the second calf born to female Asian elephant Mali and bull elephant Doc, both age 21.

At birth, the baby weighed 268 pounds and measured about 3 feet tall. The Rosamond Gifford Zoo is among 30 accredited zoos that participate in the Species Survival Plan for Asian elephants overseen by the Association of Zoos & Aquariums (AZA).

"Asian elephants are critically endangered in the wild, so it's a huge accomplishment to be able to breed them in human care," County Executive McMahon said. "I congratulate the zoo and its dedicated animal care staff, as well as the Cornell University College of Veterinary Medicine team that assisted them in preparing for this birth."

An elephant's gestation period ranges from 20 to 24 months. Mali's pregnancy lasted an estimated 660 days, said Zoo Director Ted Fox. After determining the pregnancy was progressing well over a year ago, the elephant care and veterinary team began preparing for a Christmas 2018 due date, Fox said.

In recent months, the team conducted birthing drills in the elephant husbandry barn, using a life-size inflatable elephant to represent Mali and a giant boat buoy to represent the baby, Fox said.

He said Mali started showing signs of active labor at 5:30 a.m. January 15 and the baby was born less than a half hour later. "Mother and baby are both doing fine. We will monitor them closely while giving Mali and her newborn time to bond."

The zoo will be posting photo and video updates on its social media platforms so the public can see the baby's progress leading up to a springtime introduction to the public, Fox said.

The zoo is in the midst of a construction project to expand its Asian Elephant Preserve from 4.5 acres to 6 acres and improve viewing access to elephants and other species on the Wildlife Trail. The construction is expected to be completed by Memorial Day weekend.

"We are looking forward to a great summer filled with opportunities to watch this little baby grow," Fox said.

Asian elephants are the species the Syracuse zoo is most famous for helping to save as part of its AZA wildlife conservation mission. Of several thousand zoos and aquariums in North America, only 232 have passed the rigorous inspections required for AZA accreditation. Of those, 30 have Asian elephants and only 11 have breeding programs for this endangered species.

The new addition brings the zoo's elephant herd to 8 animals, including a three-generation family group that includes Mali and Doc's first calf, Batu, a male who turns 4 in May, and Mali's mother, Targa, 35. The Preserve also is home to the calves' three unrelated "aunties" -- matriarch, Siri, who turns 52 this year, as well as Romani, 41, and her daughter Kirina, 23.

Asian elephants are critically endangered in their native habitat in Asia and India due to habitat destruction and hunting and poaching by humans. Only about 30,000 are estimated to remain in the wild.

The zoo's successful participation in the AZA Species Survival Plan, its state-of-the art elephant care facilities - including a 50,000-gallon elephant watering hole with green infrastructure - its experienced elephant care team and its Cornell Veterinary team set it apart as a model for elephant programs around the world.
###