The cubs are being hand-raised by keepers after Tabei demonstrated some difficulty in caring for them on her own, said Zoo Director Ted Fox. Keepers are bottle-feeding them every four hours and monitoring their intake and weights. Keepers named the cubs Loofah and Doofah, from “The Land Before Time,” as a nod to the zoo’s summer-long Dinosaur Invasion exhibit.

Red pandas are a critically endangered species, with fewer than 10,000 estimated remaining in the wild in their native Nepal. They are called pandas because, like the giant pandas of China, they eat primarily bamboo. The word “panda” comes from a Nepali word meaning “bamboo eater.”

The Rosamond Gifford Zoo is involved in increasing the red panda population through the Species Survival Plan (SSP) for red pandas overseen by its accrediting organization, the Association of Zoos & Aquariums (AZA).

County Executive Mahoney praised the zoo for its success in breeding these endangered animals. “Having recently celebrated National Zookeeper Week, we can say that we are very proud of our zoo staff and we appreciate their dedication and hard work on behalf of all the animals in their care.”

Fox said these are Tabei’s third set of red panda cubs since 2015. Her first cubs, males Rohan and Pumori, went on to start their own families at the Central Park Zoo and the Erie Zoo. Ravi and Amaya, a male and female born in 2016, are now at the Detroit Zoo and the Sacramento Zoo respectively. The red panda SSP works to pair unrelated animals from a diverse gene pool in the interest of producing healthy offspring for survival of the species.

The new cubs will continue to be hand-fed and monitored by zookeepers while being kept in an isolette in the zoo Veterinary Clinic. As they get larger, they will be moved to the glass-enclosed room off the zoo’s upper lobby. They should be ready to move to the red panda habitat on the zoo’s Wildlife Trail later this year.

The red panda cubs are sure to be a highlight of a popular zoo event, International Red Panda Day on September 16. Stay tuned to the zoo’s Facebook page and event site, syracusezooevents.org, for details. 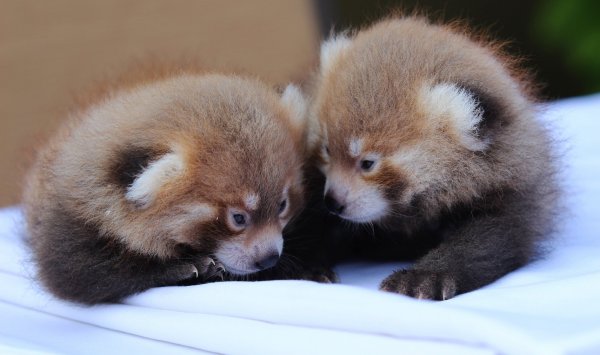