The Rosamond Gifford Zoo is pleased to announce the addition of five markhor to its herd. The babies (also known as kids) were born between May 30 and June 6. There are three males and two females, including one set of triplets. The kids were sired by the zoo’s male markhor, Thor.

“These births demonstrate the Rosamond Gifford Zoo’s commitment to international conservation and the Species Survival Plan, a collaborative effort between the Association of Zoos and Aquariums and zoos around the world to help ensure the markhor’s survival,” said Zoo Director Ted Fox.

Markhor are the largest members of the goat family. They stand up to 45 inches tall at the shoulder and weigh up to 250 pounds. Male markhor have longer hair on their chins, throats, chests and shanks in comparison to females, in addition to longer horns—some up to five feet in length.

The Rosamond Gifford Zoo is home to Capra falconeri heptneri, one of three species of markhor. Found in the wild in scattered populations and greatly reduced distributions, the species is limited to Turkmenistan, Uzbekistan and Tajikistan and is thought to also exist in the Darwaz peninsula of northern Afghanistan. Markhor are naturally agile and sure-footed given the mountainous regions, cliffs and grassy foothills of their native habitat.

Markhor have been listed as an endangered species since 1994, with an estimated 7,000 individuals living in the wild. Herds have been reduced by trophy hunting, habitat destruction, wars and competition from livestock; however conservation efforts in limited areas are resulting in a comeback by the wild population.

The markhor kids can be seen on exhibit with the rest of the herd in the Wildlife Trails area of the zoo. 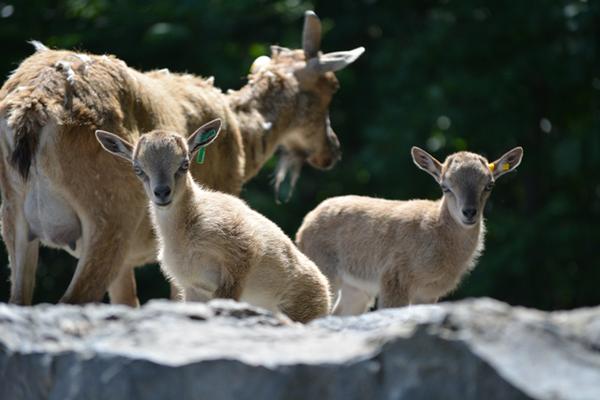