County Executive Joanie Mahoney joined staff at the Rosamond Gifford Zoo today to announce that six Humboldt penguin chicks have hatched at the zoo this season. Mahoney introduced one of the chicks at today’s press conference.

“It is always wonderful to welcome new babies at our zoo. We look forward to the arrival of penguin chicks each year. Congratulations to the staff on their continued success,” said Mahoney.

There are currently 37 penguins in the Rosamond Gifford Zoo’s colony. The zoo has hatched 48 chicks since 2006. The newest chicks will remain under the care of their parents until they are weaned. They will join the rest of the colony on exhibit at Penguin Coast later this spring and summer.

“The Rosamond Gifford Zoo plays an important role in conserving Humboldt penguins. Our penguins are part of a North American population that is genetically and demographically managed by the Species Survival Plan. Penguins from our colony travel to other AZA-accredited zoos and aquariums to ensure efforts to continue populating the species,” says Zoo Director Ted Fox.

Zookeepers have named the first three chicks. The first, a female, is Estrella which means “star” in Spanish. The second, a male, is Luis which means “famous warrior” in Spanish. The third, a male, is Elmer. Elmer’s egg, which suffered a crack early on, was successfully hatched after Zoo Director Ted Fox applied Elmer’s Glue to repair the fissure. The community will be invited to help vote on a name for one of the three other chicks. A contest will be announced at a later date, once zoo staff determines the chicks’ genders. Contest details will be shared via a media alert and on the zoo’s website and social media platforms. 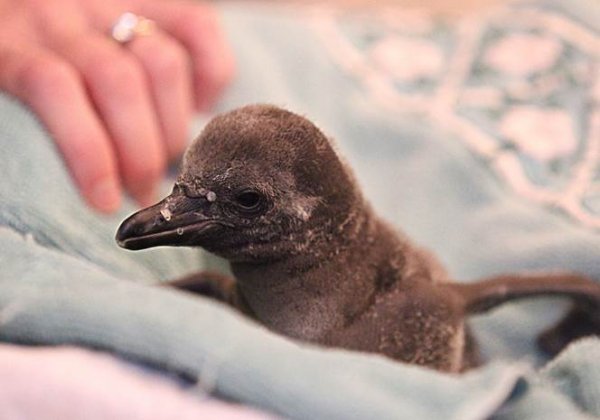