A new baby patas monkey was born at the Rosamond Gifford Zoo on August 1, and the zoo is holding an online vote to name the baby. Since the baby monkey was born during the zoo’s summer-long Dinosaur Invasion! exhibit, its name will be part of a 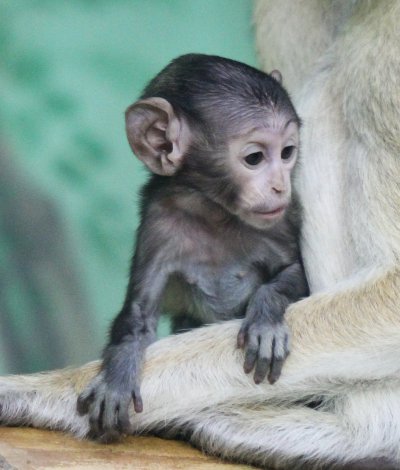 theme. Animal care staff are naming all new additions to the zoo during the dinosaur exhibit after characters in “The Land Before Time” movies. Primate keepers determined that the new baby is a female. They selected five potential “Land Before Time” names and are asking members of the public to choose the one they like best in an online vote at www.rosamondgiffordzoo.org/naming-contest.

The choices are: Mo, Foobie, Etta, Ali and Shorty.

The new baby monkey is the sixth born to patas parents MJ and Becca as part of the Species Survival Plan (SSP) for patas monkeys overseen by the Association of Zoos & Aquariums (AZA). The baby can be seen clinging to her mom for the near future, either in the patas monkey exhibit in the Social Animals wing of the zoo or outside in Primate Park. Patas monkeys are native to the rainforests of Western Africa through the savannahs of Kenya, where their population is declining due to poaching and habitat destruction. They are the world's fastest primates and can run at speeds over 30 miles per hour.