Home to the Saw Mill Creek Shelter, Bay View Shelter, Willow Bay Shelter (available by reservation only) and open public picnic/grill spaces, the Willow Bay area is the most popular picnic space in Onondaga Lake Park. This waterfront location offers spectacular views of the Syracuse skyline, several shaded nooks, a small playground and much more…. From this area you can catch the tram or start your walk, run, bike ride or other activity by accessing the East Shore Recreation Trail, the Shoreline Walking Trail or following the trail to the west shore. Several walks/ runs and other events are hosted annually in this area. 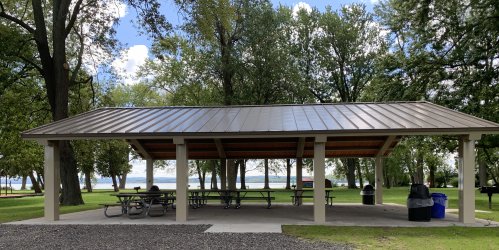 Willow Bay was not named for the massive willow trees in the area. It was named for the willow bush that made Liverpool nationally known for its basketry. The willow industry began in 1852, when John Fischer, a German salt boiler, noticed some of the willow growing that closely resembled the German domestic willow that was used for basketry. The industry became known for its production of laundry baskets and regular hand baskets that were used for markets. Later, willow furniture was produced. While their products became nationally known during the peak of the industry between 1892-1920, baskets were still being made up until 1971. For more information about the willow industry, contact the Village of Liverpool Historian's Office.