The Rosamond Gifford Zoo is pleased to announce the birth of two red pandas. The male cubs, named Pumori and Rohan, were born on June 25. The zoo estimates that the cubs weighed around two to three ounces at birth, as staff was hands-off for the first 10 days of life. Rohan currently weighs a little over one pound and Pumori a little under.

Their mother, Tabei, is a two-year-old first-time mom. Their father, Ketu, is a four-year-old first-time dad. He came to Syracuse from Hamilton Zoo in New Zealand and is valuable to the genetic pool of the North American red panda population. Like his father, Pumori is named after a Himalayan mountain. Rohan means “ascend” in Sanskrit. Their mother, Tabei, is named after Junko Tabei, the first woman to reach the summit of Mt. Everest.

“It is always exciting to have new babies at our zoo. These red panda cubs are important to the North American population and a testament to the hard work of our zoo staff. I commend the dedicated keepers and veterinarians for their continued success,” said County Executive Joanne M. Mahoney.

“We are very proud of our red panda parents, Tabei and Ketu, and the work of our animal staff. We continue to have a successful red panda breeding program here at the Rosamond Gifford Zoo working with the Association of Zoos and Aquariums as part of the Species Survival Plan. The births of Pumori and Rohan will help ensure the survival of this endangered species,” says Zoo Director Ted Fox.

Red pandas are born blind. They are cared for by their mothers for the first two to three months of life, until they are weaned. They typically open their eyes around two to three weeks of age. Pumori and Rohan are currently being weaned and will be on exhibit during the day from 10 a.m. to 3 p.m. inside the zoo’s former birthday party room, located near the Jungle Café seating area. (Schedule subject to change.)

Red pandas are endangered, with less than 10,000 individuals in the wild. They are found in the Eastern Himalayas and Southwestern China. The loss of nesting trees and bamboo due to deforestation has caused a decline in their numbers.

Contrary to its shared name, said to come from the Nepali word “ponya” meaning bamboo or plant-eating animal, the red panda is not closely related to the giant panda. The red panda belongs to the same family as the weasel, raccoon and skunk.

The red panda has a round head with large, pointed ears. Its white face has a reddish-brown stripe extending from eye to lower jaw (similar to a tear mark). The red panda’s coat is reddish–brown, wooly and dense, with lighter colored bands on its tail. Its legs are black and the soles of its feet are covered with dense hair that gives protection from cold and hides scent glands. Its forepaws have a false thumb (actually an enlarged wrist bone) that enables it to climb and grasp bamboo leaves and poles.

The red panda is nocturnal, crepuscular (active at dawn and dusk) and arboreal (spending much of its time in trees). Its diet in the wild consists of mostly bamboo, some fruit, grasses, roots, acorns, insects, eggs, young birds, small rodents and lichen. With 36-38 teeth and strong jaw muscles, red pandas are able to crush and chew bamboo and eat meat 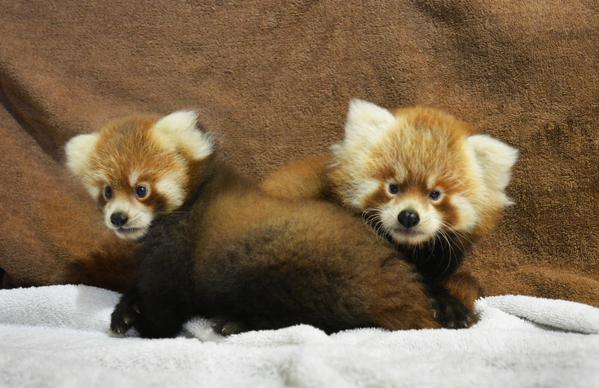